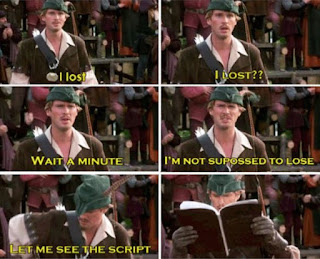 If a man doesn't want to date a fat woman, or a woman he's not attracted to, or a single mom, or a dark skinned woman, even if she's an amazing person, society is totally fine with that, and in fact men are encouraged to chase women as status symbols, regardless of how cruel, vapid, superficial, or unlikeable that woman may be.

When a woman doesn't want to date a guy who's fat, or much older than her, or otherwise deemed "unattractive" she's a shallow bitch because OMG he's such an amazing dude, even if he's whiny, creepy, totally lacking in confidence, or stalks her and refuses to hear no "out of love for her" (barf) and/or feels entitled to her because women are still seen as property to be acquired.

More and more, women are behaving in ways that are traditionally associated with maleness, and y'all men are losing your damn minds, as if you didn't invent this gross patriarchal bullshit in the first place.

Women aren't innately "more into personality" or "looking for a provider" or "seeking love over sex" or "more programmed for monogamy" or, really, all that different in our desires, but this shit has been beaten into our blood through millennia of male oppression and domination, and in order to survive we've had to follow along.

It's 2018. Women have choices (despite shit like FOSTA trying its damndest to keep us dependent on men), and increasingly we are just done with your bullshit.

The days when a man managing the absolute bare fucking minimum of human decency and basic grooming while women are expected to be....

magical, kind, beautiful (naturally, of course) hairless, balanced creatures who are sexy - but not too sexy - and who make you feel needed - but not too much (omg she's psycho and wants to make concrete plans once a week!) - who make their own money (and have to pay for their own dinner even though men STILL make more for work that's half as good) but don't make you feel emasculated because of it, and are expected to take care of your emotional labour while also tending to our own, and of course being careful not to be seen as "too emotional" (it's probably PMS, bruh) or stereotypically "female", all while maintaining a youthful appearance, a perfect HWP and waist ratio and an acceptable thigh gap (and not complain about actually being measured this way by men) and fretting over never, ever being good enough by the standards of society and photoshop and mediocre dudes, and of course "eating like a man" while the ideal requires starvation or unavailable genetics...

well, sirs, those days are coming to a close because we just do. Not. Need. You. Anymore.

So, before you complain about bitter feminist bitches like me (no wonder she's single, dude) and about the state of things, be thankful women are even still tolerating your presence on this planet. You (straight, cis) men are incredibly difficult to love, and while many of us would enjoy nothing more THAN to love you for a week, a month, a lifetime... we need you to do better and hop aboard the Abolish Patriarchy Train™and just meet us on the high ground. Hold yourself, and your bros, accountable for the shit you do.

And if you read this, and feel defensive (but I'm a nice guyyyyy!), and think it's so unfair for a woman (gasp) to generalize in this way about men (learned it from you), and that if YOU did that (men do it all the time) there'd be a "witch hunt" (you should read about witch hunts, bro, then google sentence disparities between women who kill their abusers in self-defense and men who kill their wives for cheating) you're likely part of the problem.
Posted by Brazen Lee at 2:39 PM