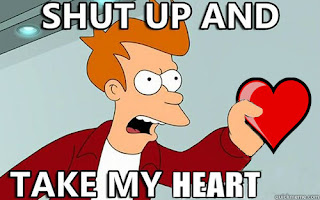 If I'm being honest with myself and you, reader, he's not even really my ex. He used to be my client. Then I stopped charging him. And he's basically been a complicated, glorified bootie call ever since.

And now he lives with me. Because, haha, fuck me, I am in love with this man and have been since basically the first time I saw him. Which, yes, I know. That makes no sense. Love isn't about that.

Other reasons why I'm single:

- I'm not that crazy about men. I love their erections, but often little else
- I can't walk more than a block without pain
- I have higher standards than fat girls are supposed to have
- They don't get me high like he does
- I really don't log into my POF account, ever.
- I really am too busy
- I've gotten so used to being alone


And I'm not even really single. On facebook, it's "complicated", but I'm in an open relationship with another wonderful man. He just lives across a national border. But he clearly loves me, and I him. So I am not wandering, close to death, in some loveless wasteland. I have so much love in my life it's kind of unfair.

But this guy. What is it about him? Why, after so much pain, violence, and trauma between us do I still have a soft spot for him? If this was a movie I'd be like "GIRL, NO". In fact, that's happened. "Oh, that's like me and him" I quip, laughing.

But I always end up back here. Crying, snotty, with a fuckin' headache and questioning my life choices, and saying to myself "I WAS DONE WITH HIM, I REALLY WAS". We have been here before!!

The last thing I wrote about him was about him being abusive, and the thing before that was boasting about tiny triumphs, and how I was over him. Happier without him. Moving on. And damnit, I fuckin' swear I was.

And then my landlord asked me to move. And I live in a city in a housing crisis, paying half of market rent, just got off welfare, and I know that I can't afford anywhere else. And he needed a place. And so I told myself I'll save some money! I told him earlier, while we were fighting, that he's only here for money, that even though he thinks I'm content with snuggles and regular dick and that I just want his love, I need to save money. And it's partly true. But then we fought, and now he's moving out, and I'm drinking Jack Daniels straight out the bottle and bawling my damn eyes out. And I'm texting my girl asking her WHY DO I LOVE THIS MAN? He often comments about how we blur the lines and are "more than roommates", just as he's always said "we're more than friends" and I'm like...

FUCKING DUH GENIUS, REALLY? You think I fuck my other friends while my body is on fire and I stroke their faces?  You think I let them behave like selfish, insecure, destructive assholes and share my bed? You've stalked me multiple times when I've tried to let you go, and I can not see you because I have literally no control over my hands and lips in your presence and touching you basically sets my soul on fire, and vice versa, and you're here stating the most obvious shit EVER? He pretends not to love me because it's not perfect, but we both know what is happening here. One day we were discussing past relationships, and he said it, like it should be obvious that he's never had this kind of relationship, that went so deep, as with me. When he's drunk he professes it all, out loud, and I'm just like "I know you love me". But when we're sober, it's not enough. It's not in the open. It's not real for everyone to see.

So, there's that. I'm in love with a man who's ashamed of me, who still emails hookers asking for pictures without any intention of booking them, and then calls them "bitches"—I hate men who do that! He is not the kind of man I want for myself. I deserve better than a man like him! But he is the man I tell my friends to call when I end up in the hospital on Christmas and think I might need surgery—y'know, in case I die. "CALL HIM" I told my best friend, to his chagrin "TELL HIM TO COME. AND THAT I LOVED HIM. I NEED HIM TO KNOW I LOVED HIM!".

I tell myself "Oh, I don't log into my POF account that often" and "Oh, I'm focused on work right now", which is partly true. But a larger part of me has the man I love, like I've never loved anyone else, living with me, and that consumes much of my being.

And OH, I will deny it tomorrow. Rationalize it away, along with my spelling mistakes, cause I'm gonna publish this shit before I pass out drunk (I don't really drink, and haven't been drunk in more than a year—and the ex has often mused aloud about when the 750ml bottle of Jack atop the fridge will get drunk. NOW YOU KNOW MOTHERFUCKER.)

I'm going to read this shit from my desk at work tomorrow morning and most likely be horrified, because these are the things my sober self doesn't admit to out loud. I barely let my subconscious near these feelings. The feelings that still have me picturing me, there in the desert, alongside him and his family, because he's asked me "oh, why don't you come and work in my country?" Because he's said "why don't WE get married?", because I know that if I was just a bit unlike myself, he would want me, openly, and unashamed. That pictures us as a proper couple. Picturing things that I know, in my heart, will never be. Telling myself "but he paid ME. He chose ME". Pretending that he could EVER love me for me, and me for him.

If ever there was a textbook case of love/hate relationship, it's me and him. I love him for his humour, his smile, warmth, passion, focus. He loves me for my warmth, passion, humour, kindness, and devotion.

But he hates me. For being a whore, but worse... for being unashamed of it. For being honest about it.

And I hate him... for denying his.

I already love you, and I know who you are.